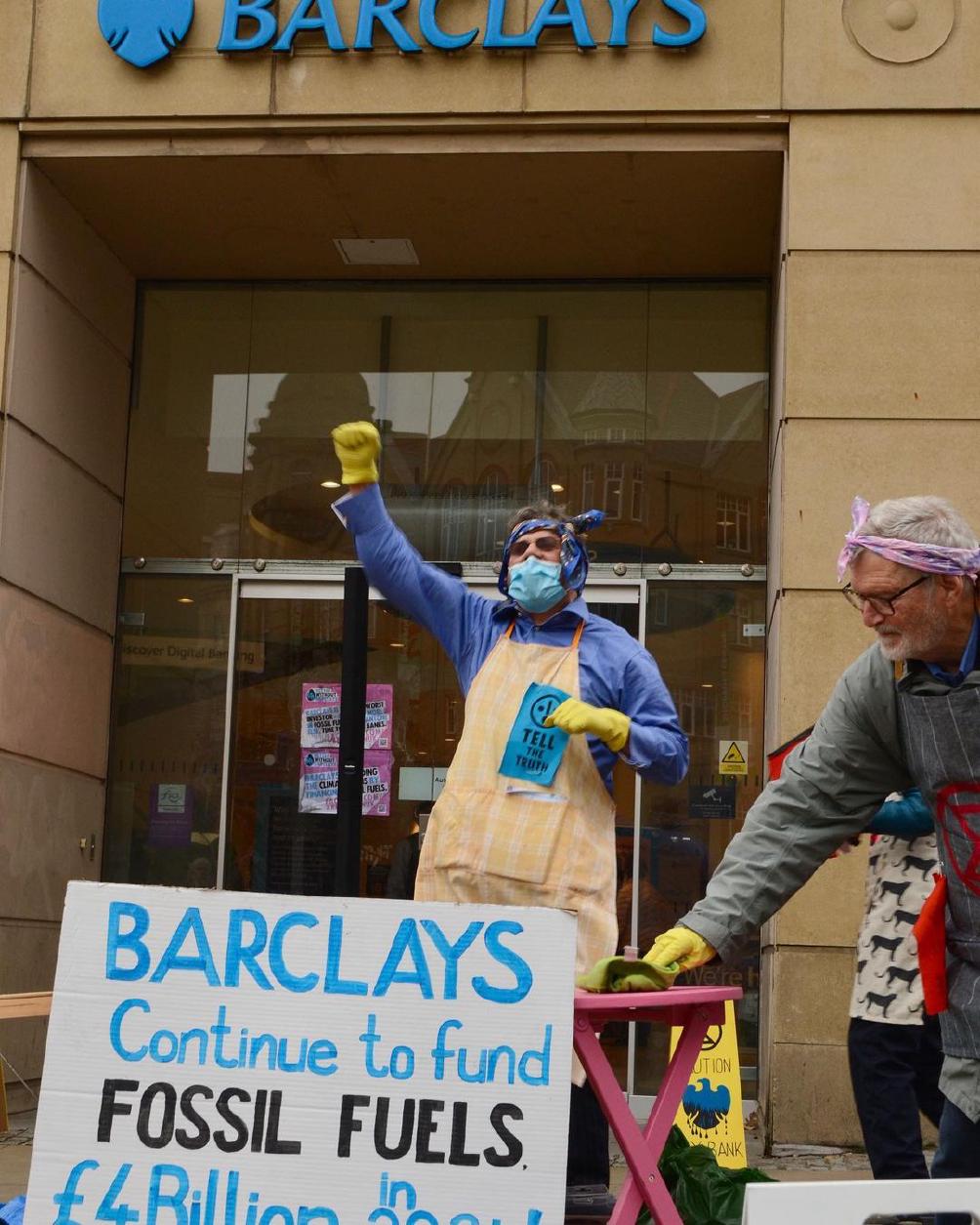 As part of the Barclays day of action happening all around the country XR Sheffield thought it was about time Barclays cleaned up their act.

Barclays is the biggest funder of fossil fuels in Europe and the 7th biggest worldwide. Despite its greenwashing Barclays has continued to invest over $54bn into new fossil fuel projects since the Paris agreement.

Our scrubbers did their best to help clean up Barclays today, but what we really want is for @barclaysuk to STOP FUNDING FOSSIL FUELS.

A crowd gathered from midday as around ten demonstrators in fancy dress peacefully scrubbed the floors and walls of the bank while dancing along to music.

Jenni Crisp, Member of XR Sheffield, said: “This is part of an ongoing money rebellion campaign against Barclays because they’re climate criminals.”

According to a report published in March this year, Barclays is Europe’s largest and the world’s seventh biggest funder of fossil fuels.

Ms Crisp said: “This has been ongoing for a long time, and despite our digital and physical protests they are not changing their practice.”

The demonstrations also included children’s shoes being laid out on the floor which Ms Crisp says “represents the lives of children that are endangered by our continued investment in fossil fuels.”

Police arrived 30 minutes after the demonstrators entered the bank and said: “Our main aim is to keep both protestors and workers safe.” Barclays staff refused to comment.

It’s part of a national day of ‘Better Without Barclays’ action against the bank, with protests staged by the environmental movement in cities such as Leeds, Manchester and Glasgow.

Ian Pearson, another member of the movement said: “This is also a response to COP27, so we need to raise awareness and get people more motivated about saving our planet.

COP27 has now entered its second week, where world leaders are meeting in Egypt to tackle climate change.

It follows a year of climate-related disasters and broken temperature records, with the United Nations reporting that the world is on a ‘fast track’ to disaster, and scientists warning it is ‘now or never’ to limit warming to 1.5 degrees.

A huge XR protest is planned for April 2023 in London, with the message from members clear – “If you care, get out on the streets, because we’re running out of time.”