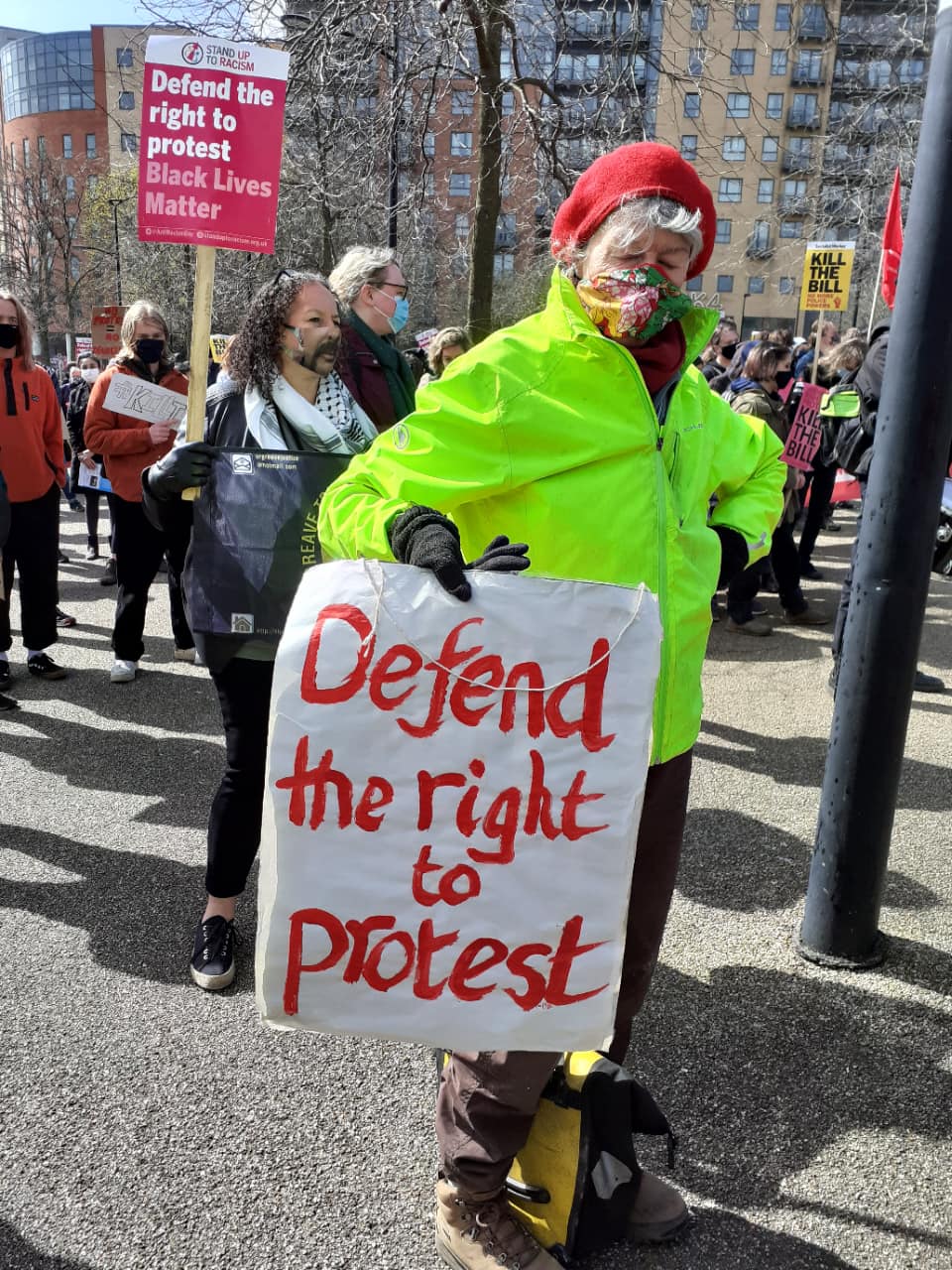 Over the coming weeks and months we will be sharing the story of XR Sheffield rebel Heather’s journey of appealing her unjust conviction during the 2019 rebellion. Here’s what Heather has to say:

“I felt really moved and heartened by the solidarity of rebels at the XR Sheffield meeting on the 22nd November. I shared my dilemma about whether to go ahead or not with an appeal to my conviction in June this year following arrest on Millbank during the October 2019 rebellion. XR legal were encouraging some of us who have been convicted of Wilful Obstruction of the Highway to go for appeal to test out if the Ziegler ruling could be used to successfully appeal XR convictions. The Ziegler ruling, comes from a Court of Appeal case of four protestors charged with Wilful Obstruction of the Highway, who had locked on and blocked the road to the DSEI arms fair in London, December 2017. The Crown Court judge hearing this case in July this year, ruled that Article 10 and 11 of the Human Rights Act does include the right to protest on the highway if it is considered relevant and proportionate and that there is no automatic primacy of the rights of road users over protestors: https://caat.org.uk/.../the-ziegler-case-direct-action.../

In contrast to these 4 brave arms fair protestors, my action leading to this arrest was embarrassingly trivial and a bit ridiculous! I am on the police web cam in a bee hat waving a wet Sheffield banner repeating “its still wet”. I was on Millbank with my affinity group, XRcreative, and in support role. I definitely did not want to risk arrest as I was still within the 6 months of a conditional discharge following arrest at the April rebellion that year. I had just arrived 8 am on a wet morning, police had already blockaded Millbank. I was walking around, drying the Sheffield banner, not sitting down with others. Suddenly I was grabbed from behind and told I was “under arrest”. This was under Section 14 of the Public Order Act. Under this Act, I know police need to ensure potential arrestees need to know the consequence of not moving. I did not hear any warning. I was very incensed and shocked. After 14 hours in Brixton nick I was discharged pending investigation, as were several other Sheffield rebels. I was more shocked 5 months later to hear I was charged with Wilful Obstruction of the Highway. I felt then justice must be done, so pleaded not guilty. XR-legal were extremely helpful with webinars and zoom calls and supported me in developing my own defence case. So in June this year I defended myself in London Magistrates court, cross examining the police, putting up my defence, all good so far. But more shock to come. The magistrate decided I was guilty and I got massive fine and costs of £1,525.

So when asked if I wanted to appeal, I thought “no”. I have no personal motivation for going to appeal. There’s no heroic story about what I was arrested for. I’ve lost all trust in the British Justice system . XR lawyer say I have a 50:50 chance of acquittal. If I lose I need to have £620 ready for court costs. Not very good odds for going through the courts in a long, tedious and lonely process. Then I reflected on how I sign myself “love and courage.” Love for the earth and, in light of the draconian Police and Justice bill, love for all the non violent protestors courageously risking arrest and its consequences. Courage, I thought I could find if I was going through the appeal process WITH XRSheffield, in solidarity. From solitary to solidarity! So amazing and heart warming, XRSheffield was pretty unanimous in agreeing an appeal would be important for all arrestees, present and future. I would be doing it for and with others. So I am going ahead with the appeal, with the solidarity of XR Sheffield.” Please support and share this post and stay tuned for updates on Heather’s appeal!

And if you haven’t already sign this Liberty petition against the authoritarian PCSC Bill due to go through the House of Lords this Wednesday: https://action.libertyhumanrights.org.uk/.../petition/1…

Photos include Heather at a Kill the Bill demo this year, a justice for Palestine demo and being arrested in 1984 the day cruise missiles arrived a Greenham Common!