Look to the Future 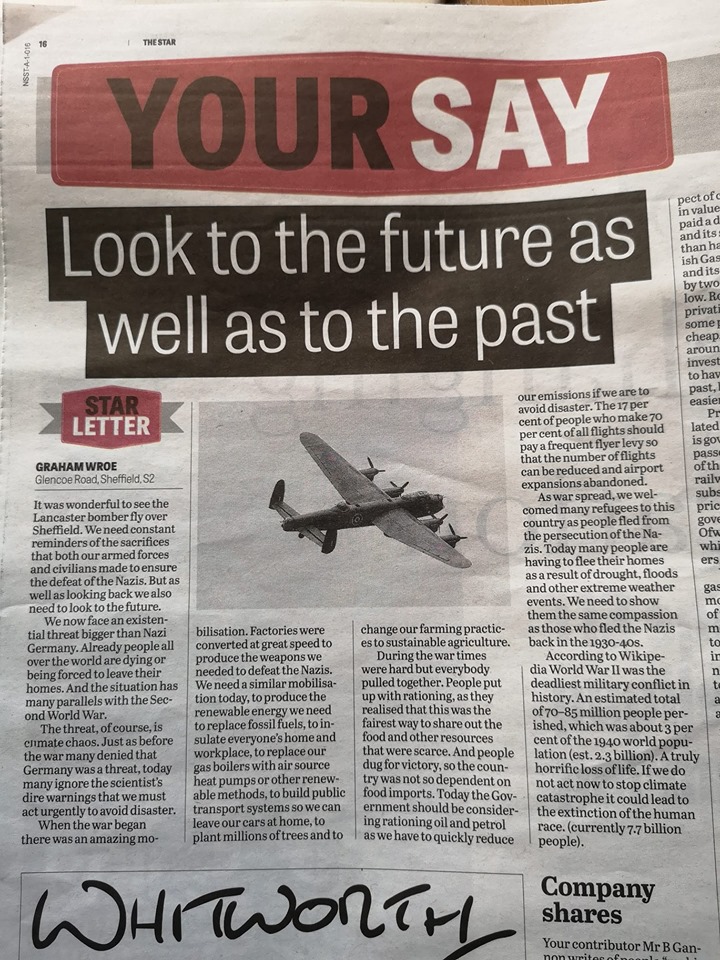 It was wonderful to see the Lancaster bomber fly over Sheffield. We need constant reminders of the sacrifices that both our armed forces and civilians made to ensure the defeat of the Nazis. But as well as looking back we also need to look to the future.

We now face an existential threat bigger than Nazi Germany. Already people all over the world are dying or being forced to leave their homes. And the situation has many parallels with the second world war.

The threat, of course, is climate chaos. Just as before the war many denied that Germany was a threat, today many ignore the scientist’s dire warnings that we must act urgently to avoid disaster.

When the war began there was an amazing mobilisation. Factories were converted at great speed to produce the weapons we needed to defeat the Nazis. We need a similar mobilisation today, to produce the renewable energy we need to replace fossil fuels, to insulate everyone’s home and workplace, to replace our gas boilers with air source heat pumps or other renewable methods, to build public transport systems so we can leave our cars at home, to plant millions of trees and to change our farming practices to sustainable agriculture.

During the war times were hard but everybody pulled together. People put up with rationing, as they realised that this was the fairest way to share out the food and other resources that were scarce. And people dug for victory, so the country was not so dependent on food imports. Today the Government should be considering rationing oil and petrol as we have to quickly reduce our emissions if we are to avoid disaster. The 17% of people that make 70% of all flights should pay a frequent flyer levy so that the number of flights can be reduced and airport expansions abandoned.

As war spread, we welcomed many refugees to this country as people fled from the persecution of the Nazis. Today many people are having to flee their homes as a result of drought, floods and other extreme weather events. We need to show them the same compassion as those that fled the Nazi’s back in the 1930-40s.

According to Wikipedia World War II was the deadliest military conflict in history. An estimated total of 70–85 million people perished, which was about 3% of the 1940 world population (est. 2.3 billion). A truly horrific loss of life. If we do not act now to stop climate catastrophe it could lead to the extinction of the human race. (currently 7.7 billion people).

See what is going on nationally at: rebellion.earth